Green on White (in red), is an installation of the enigma of Scent, combined with postcards from my monograph: “Fleur,” Plant Portraits. At The Gallery on The Green.

Working towards an abstraction of Nature, Light, Air – through my camera, there is a sense of another world, where the enlarged gaze of a child combines kaleidoscopic intrigue with magnification.

As an icy Siberian blizzard descended around me, I planted the floor of the phone box Gallery with white hyacinths and moss. In the protected climate the scent began to build as the snow slowly thawed.

The perfume of the 64 flowers became intense, the heady fragrance filled the space and wafted down The Green. Overwhelming, it had an enigmatic effect, upstaging the two-dimensional images.

The power of the scent went through its height, started to smell dense, musty as it evaporated – the flies came marking the decline of the bloom. Gradually it was over, and the images played their part again. 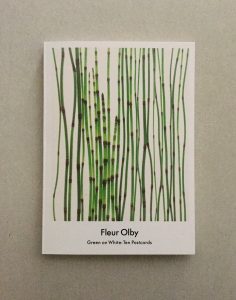